Marriage, Family, and the Image of God:
If It's Permanent, Make It Good

This post is adapted from a chapter of my upcoming book, Marriage, Family, and the Image of God. 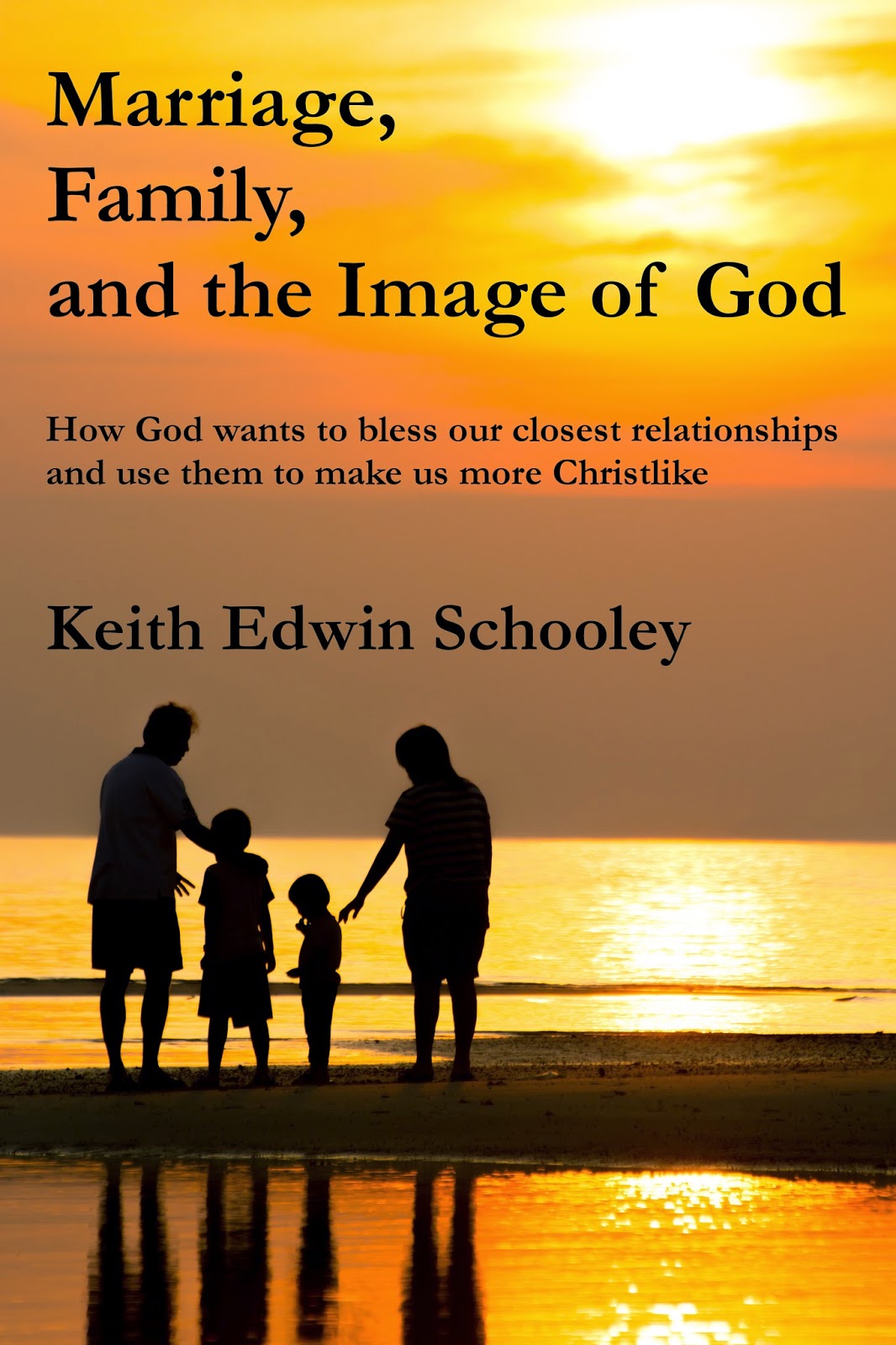 Cecile and I decided, even before we got married, that if marriage was permanent, we needed to make a commitment to make it good. That, I believe, is one of the primary reasons that God created marriage to be permanent. Of course he wants to spare us the pain of broken marriages and families. But he also wants us to take the permanence seriously, so that we will decide to make it the best we can, and so that in doing so, we will suppress the individual selfishness that has plagued human beings since the Fall.

The best thing you can do, once you’ve decided to make marriage permanent, is to make it good. And the only way to make it good is to resolve that you are no longer two people but one, that all decisions need to be made with “us” and “we” as the focus, not “you” and “me.” And that takes a willingness for self-sacrifice that, humanly, we don’t have, which is why so many marriages end up miserable and broken. But by seeking God’s help to overcome our innate selfishness, God can use our marriages to mold us into his own self-sacrificial nature; in other words, to conform us into the image of his Son. Other life paths, of course, can accomplish the same thing—those who are married don’t have an exclusive avenue into the image of God. But marriage does have unique challenges. No other relationship is as capable of fostering so much intimacy and creating so much pain.

Of course, making your marriage good is not simply a matter of determining to do so. It can be very difficult. When Jesus impressed on his disciples the permanence of marriage in Matthew 19, they reacted in horror. “If this is the situation between a husband and wife, it is better not to marry” (v. 10). Jesus responds, essentially, that remaining celibate for the Kingdom of God is a gift that not everyone has. So for those of us not gifted with celibacy, it’s still up to us to make our marriages as God-honoring and good as we can.

Along these lines, the apostle Paul writes something interesting in 1 Corinthians 7 about the marriage relationship:

Of course, Paul’s point is to persuade his readers that marriage may not be the best decision in the first place. He’s encouraging them to at least consider celibacy as an alternative to marriage, one that offers practical advantages to those devoting themselves to “the Lord’s affairs.” But notwithstanding Paul’s emphases, what he says about marriage is instructive. A married man “is concerned about the affairs of this world—how he can please his wife—and his interests are divided.” While Paul appears to view this as an obstacle to single-mindedly devoting oneself to the Lord, he doesn’t say that things should be different. He doesn’t say that this should or should not be the case. He simply says that it is. He states it as a simple fact. Similarly, “a married woman is concerned about the affairs of this world—how she can please her husband.” It’s simply a fact. Paul’s response to this fact is not to suggest another way of doing marriage; his solution is to consider avoiding marriage altogether! It seems a given that within the marriage relationship, pleasing one’s spouse is simply a part of the package.

The question here is, do we please our spouses reluctantly, out of necessity? (“Gotta keep the peace with the ol’ ball and chain, know what I mean?”) Or do we please them gladly, thoughtfully, because we want to, because it makes us happy to see them happy?

This, I think, is the key concept behind one of the most contentious passages about husband and wife relationships—Ephesians 5. Paul writes “Husbands ought to love their wives as their own bodies. He who loves his wife loves himself. After all, no one ever hated their own body, but they feed and care for their body, just as Christ does the church” (vv. 28-29). “He who loves his wife loves himself.” It’s that simple. What you put into a relationship is what you get out of it. “A happy wife makes for a happy life,” as some say.

So then why is this so difficult? If it’s so self-evident that pleasing one’s spouse brings benefits to oneself, why isn’t everyone doing it? Why is marriage, far from being the picture of what was once called “wedded bliss,” viewed as a joyless trap, where romantic relationships go to die?


It’s viewed this way because of the innate selfishness that has dogged humanity ever since the Fall. Jesus wisely linked the two greatest commandments: “Love the Lord your God with all your heart, soul, mind, and strength” and “Love your neighbor as yourself.” The second commandment, he said, was “like” the first. When we sin, we are essentially putting our own self-interests above those of God and above everyone else’s. We want what we want, and we rage at the fact that we can’t have it. And, of course, so does everyone else.

All this intrudes on the marriage relationship. Two individual human beings each want to go their own way. For a time, these ways may seem to coincide, or else we would never get married. But eventually, our individual, selfish natures take over. We take the marriage for granted, and we still want what we want. She wants nice clothes, and he wants a new car, so they fight over money. She wants to change him and he resents it. He wants her never to change, and that’s impossible for her. Each one wants to be together when they want it, and alone when they want it, and away from one another with friends when they want it, so both of them feel neglected and stifled by turns. Life forces them to make compromises, to take jobs they don’t want or make sacrifices they don’t want, and they blame one another for their situation. This is the thing behind the thing, the source of all the rest of the problems that people have in marriage.

This is why working on individual problems in a marriage seems so often not to work. We are told that the problems in marriage are finances, sex, communication, whatever. The real problem is always selfishness. Finances are a problem because each partner wants to spend (or save) the shared resources in the way that they want. Sex is a problem because each person wants what they want in bed, regardless of what the other person wants. Communication is a problem because each person wants to convince the other that they’re right and the other one is wrong so that they can have things their way. Of course, we don’t think that way consciously. Jeremiah tells us, “The heart is deceitful above all things and beyond cure. Who can understand it?” (17:9). We deceive ourselves about our own motivations. We rationalize. My point of view seems so reasonable to me; why are you being so unreasonable about it? We’re all in denial, all of us, about our own selfishness.

Marriage exposes that. In marriage, we’re supposed to be one, or to be becoming one, more and more. We all understand that there are compromises to be made; we all understand, on an intellectual level, that everything isn’t going to go our way. The problem comes when we pass the blissful honeymoon period and realize that there’s going to be a lot more compromise and self-sacrifice than we ever thought was necessary. It’s not possible that I’m that wrong! I might be a little out of line, but my partner—I never imagined that they could be so selfish!


At this point, the received wisdom says that marriages are a lot of work, and that only by continually working at our marriages can we make them good. I remember, before being married, being very depressed by this advice. Who wants their marriage to be a chore? Who wants to have to struggle to make things work? Isn’t that the antithesis of the cult of romantic love—isn’t love supposed to make everything easy and wonderful?

Well, the cult of romantic love makes a lot of promises it can’t fulfill, but the idea of marriage as a chore is also wrong. The key is not to think of the work you put into marriage as a job or a chore, but rather as working on a really captivating hobby. Most of us can relate to something that requires a lot of work from us, but which we enjoy doing. Maybe it’s painting or writing or playing a musical instrument. Maybe it’s a sport or an exercise regimen. Maybe it’s gardening or landscaping or fixing cars. Maybe it’s dance or chess or woodworking. You get the idea.

Whatever that thing is for each person, we should apply that same kind of energy to our relationships with our spouses. It may seem a little crass, but we need to make them our project. If we’re honest, we’ll probably see that that’s what we did while we were dating. You spent a little too much to take her out someplace nice, not because you liked it, but because she did. You spent time getting dressed up for him and trying to look just right, and you listened to him and acted interested in the things that interested him. You both did this to create memories, to share an experience and bond.

When the other person quits doing this, we immediately notice and recognize it as selfishness. He never takes me anywhere nice anymore. She’s let herself go. They don’t listen to me anymore. The problem is that we don’t recognize it as selfishness in ourselves when we’re the ones who are doing it. The excuses come so naturally. She should understand that we just don’t have the money. He doesn’t notice anyway, so why bother? They just keep yammering on and on when I’m trying to do something else.

What we’re doing in that situation, quite frankly, is taking one another for granted. She’s got the ring, he’s got the girl, let’s move on with life. But none of us are prizes to be won and then possessed. A relationship grows as it is cultivated, and when it’s cultivated, it bears fruit. A man or a woman who invests in his wife or her husband will usually receive much more in return.

Let me know what you think in the comments below. Also, check out the book, Marriage, Family, and the Image of God, being released on Thanksgiving Day, 2014, and available for preorder on Amazon now.
Posted by Keith Edwin Schooley at 9:12 AM