The Great Commission - Who Does It Apply To, and in What Ways?

The following is adapted from "The Great Commission," in What's Wrong with Outreach.


Then the eleven disciples went to Galilee, to the mountain where Jesus had told them to go. When they saw him, they worshiped him; but some doubted. Then Jesus came to them and said, “All authority in heaven and on earth has been given to me. Therefore go and make disciples of all nations, baptizing them in the name of the Father and of the Son and of the Holy Spirit, and teaching them to obey everything I have commanded you. And surely I am with you always, to the very end of the age.” --Matthew 28:16-20

The common evangelical interpretation of the Commission involves several features. First, the Commission is understood to be the driving missions statement of the church—its placement at the end of Matthew’s gospel, spoken by the post-resurrection Jesus, makes it clear that this is Jesus’ mandate to all who follow him. Second, evangelicals apply the Commission to all believers individually: it is each disciple’s responsibility to live out this mandate in his or her life. Third, the Commission is directed specifically toward reaching the lost—that is, bringing people to saving faith in Jesus. It is generally understood in terms of rescuing people from an eternity in hell. Finally, the Commission is primarily accomplished by personal witnessing—sharing one’s faith with others—in combination with supporting preaching and missionary ministries (or directly engaging in such ministries), sometimes also in combination with such “pre-evangelism” activities as service projects that are intended to gain a receptive hearing for the gospel.

The Of Dust and Kings blog has a great article: "Divorce: Joseph and the Essence of Sacrificial Love." Here's a snippet:

Pregnant? The accusations rattle in his head, but he bites his tongue. And then, as if the pregnancy was not wounding enough, his adulterous betrothed goes on to insult his intelligence with some mystical story regarding an angel, and a divine pregnancy from God Himself.

“Yes, Joseph, I’m pregnant… but I promise I never had sex. I’m a virgin, and God magically made me pregnant! Pinky swear!”

So now he faces a choice. Betrayed, insulted, humiliated, angry, hurt – all the emotion swirls about within him, threatening to consume him, and he has to choose how to respond.

Most of us know how this all turned out, but TE Hanna really makes one think about the options Joseph really had and the price he paid for choosing the one he did. Great stuff. Check it out.

For more on marriage, check out my book, Marriage, Family, and the Image of God .

Posted by Keith Edwin Schooley at 7:50 AM No comments:

Jamal Jivanjee has a great post on the Illuminate blog--not new, but I just stumbled onto it--called Missional Confusion & the Amway Gospel.  Really great stuff.  Here's a sample:


The evangelical system has become a glorified ‘pyramid’ scheme. Like the soap, we are taught to tell people about this amazing man named Jesus Christ who loves us and died for us. We tell the world that He is the living bread. We tell people that the water He gives will satisfy. We tell people that he comes to give us abundant life, etc… then, shortly after a person is interested in this Christ and says yes, the focus changes. Instead of discovering and experiencing the depths and beauty of this glorious man, we are quickly taught that there are things we must ‘do’ to get more and train more Christ ‘distributors’.

Jivanjee also discusses the different parts of the body and how that factors in to going about the real mission of Christ in this world--very much like what I share in What's Wrong with Outreach.

Excellent stuff. Check it out.

Posted by Keith Edwin Schooley at 7:00 AM No comments:

We can learn a lot about the problems of the contemporary church by examining a seemingly unlikely source: television news.

Broadcast television news viewership has been declining for many years. There are several reasons: competition from 24-hour cable news outlets, the rise of news accessibility on the internet, and increasingly popular opinion-based news coverage appearing on all types of media. Present-day viewership is now less than half of what it was in 1980.

During the same time period, increasing pressure has been brought to bear on television news outlets to become financially self-sustaining. Once considered a public service by broadcasters, television news divisions have become subject to the same pressures as their entertainment divisions: generate advertising revenue by increasing ratings and market share. This has led to a trend toward so-called “soft news”—lifestyle, celebrity, and human-interest stories that function more as entertainment than serious information. Networks found that soft news stories would increase market share, especially when promoted heavily with teasers, so they pushed their news departments to air growing amounts of soft news, often over the objections of veteran journalists.

Read more »
Posted by Keith Edwin Schooley at 5:00 AM No comments:

Email ThisBlogThis!Share to TwitterShare to FacebookShare to Pinterest
Labels: Links 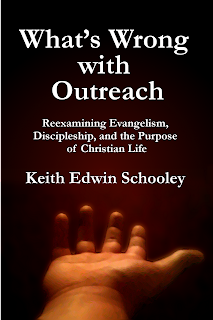 I have a new book out: What's Wrong with Outreach: Reexamining Evangelism, Discipleship, and the Purpose of Christian Life. It's available in Kindle format on Amazon and in ePub format at Barnes & Noble. Print edition available at my CreateSpace store. For more information, check out the Books page. I'll be about it soon, but for now, click the link and check it out!

Posted by Keith Edwin Schooley at 1:47 PM No comments:

Email ThisBlogThis!Share to TwitterShare to FacebookShare to Pinterest
Labels: What's Wrong with Outreach

Everything That's On Bob's Mind: Proof of Heaven?

Bob Mitton has an interesting post discussing the book Proof of Heaven in his latest blog post. Anyone who's read what I've written on NT Wright's Surprised by Hope will know that I like where he's going here:


In the end, my greatest concern is that this book will cause Christians to once again over-emphasize the idea of a disembodied heaven as our ultimate destiny. Whatever heaven (or as Jesus called it: "Paradise") may be, it is not permanent. The hope of Christianity is NOT floating around disembodied on butterfly wings. The hope of Christianity, as the Apostle Paul so clearly stated, is the physical resurrection of our bodies in the same way that Jesus was physically resurrected. Whatever the new heavens and earth will be, it will be inhabited by physical beings resurrected by the power of God.

Check it out.
Posted by Keith Edwin Schooley at 5:58 PM No comments: